Alexander and the wind-up mouse. 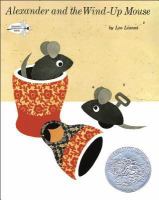 Book
Alexander, a real mouse, wants to be a toy mouse like his friend Willy until he discovers Willy is to be thrown away.