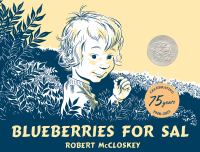 Book
Little Sal and Little Bear both lose their mothers while eating blueberries and almost end up with the other's mother.