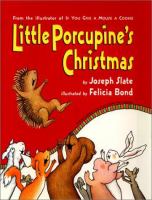 Book
Even though the other animals exclude him from the Christmas play because of his quills, Little Porcupine still ends up in a starring role.