Richard Scarry's A day at the airport. 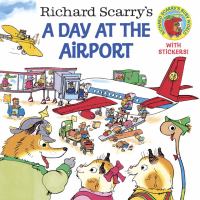 Book
Rudolf Von Flugel takes Huckle, Sally, and Lowly on a tour of the airport.