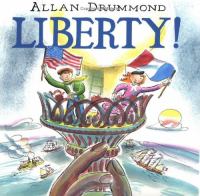 Book
Describes the unveiling of the Statue of Liberty and its importance as a symbol of freedom.