So you want to be an inventor? 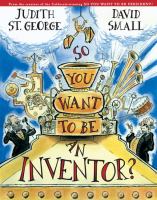 Book
Presents some of the characteristics of inventors by describing the inventions of people such as Alexander Graham Bell, Thomas Edison, and Eli Whitney.