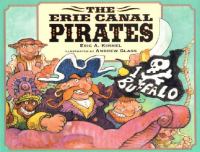 A boat captain and his men battle Bill McGrew and his pirate crew on the Erie Canal in a rhyming tale inspired by a folksong.