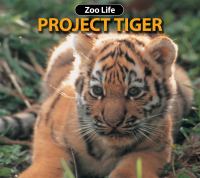 Book
Showcases the development and growth of a baby tiger at a zoo, discussing the zookeeper's role in its life and the natural habitat, foods, and life cycle of the animal.