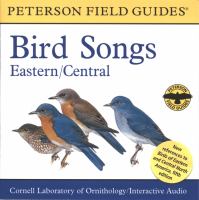 Designed to help listeners recognize birds of eastern and central North America by their songs and calls.