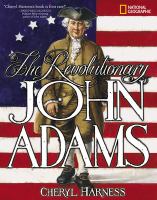 Book
A biography of John Adams with emphasis on his role in the American Revolution.