Dearly, nearly, insincerely : what is an adverb? 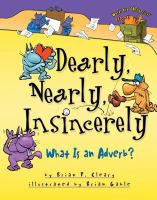 Book
Rhyming text and illustrations present numerous examples of adverbs and their functions.