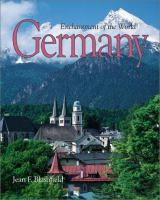 Book
Presents information on the European country of Germany, including its geography and climate, history, wildlife, economy, government, people, and religion and culture.