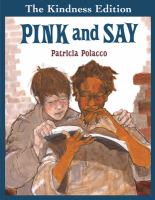 Book
Say Curtis describes his meeting with Pinkus Aylee, a black soldier, during the Civil War, and their capture by Southern troops.