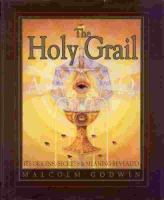 Book
Was the holy Grail Christ's cup of hte last supper, or was it originally a Celtic Cauldron of rebirth? Did Joseph of Arimathea bring the holy chalice to the Isles of Avalon in Britian, or was the Grail a treasure of the heretical Cathers? Did the grail cause the failure of King Arthur's fellowship of the Round Table, or was it the inspiration for the Knights Templar of Jerusalem to create tarot cards? Did the grail carry the sacred blood of Christ, or was Mary Magdelane the lover of Jesus who carried his blood in the form of their child? Does the Church disclaim what must be its most sacred relic, or is the Grail actually in direct oppisition to the Pope in Rome?