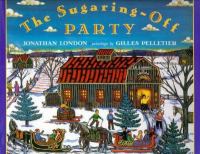 Paul's grandmother describes her first sugaring-off party at Tante Loulou's farmhouse where they boiled maple sap into syrup and poured it on snow to make a delicious dessert.