The tale of Little Pig Robinson 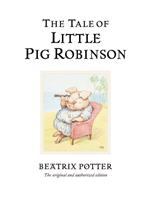 Little pig Robinson goes to market for his aunts and, after a series of unexpected and amazing adventures, including an unexpected sea voyage, settles to a pleasant life on an island in the South Seas.