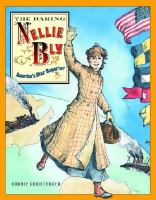 Introduces the life of Nellie Bly who, as a "stunt reporter" for the New York World newspaper in the late 1800s, championed women's rights and traveled around the world faster than anyone ever had.