Horace the Horrible : a knight meets his match 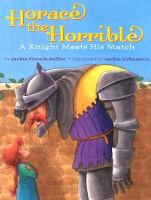 The fearsome knight Horace tries to prove to his niece that he is as good as his brother, the King, while all she really wants is someone to help her stop missing her father.