I remember Korea : veterans tell their stories of the Korean War, 1950-53 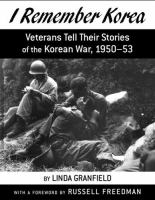 Book
Personal accounts of more than thirty men and women who served with the American and Canadian forces in Korea during the years 1950-1953.