You wouldn't want to be a Civil War soldier! : a war you'd rather not fight 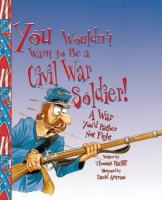