The amazing life of Benjamin Franklin 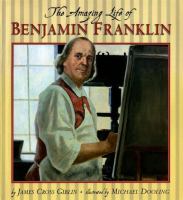 A biography of the eighteenth-century printer, inventor, and statesman who played an influential role in the early history of the United States.