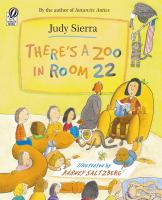 Book
Each of twenty-six poems describes the antics and habits of a zany classroom pet whose name begins with a different letter of the alphabet.