R is for ricochet 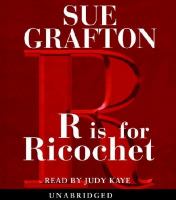 No sooner is Reba Lafferty, a child of privilege, released from prison for embezzlement, does someone from her past pay her a visit.