Forging freedom : a true story of heroism during the Holocaust 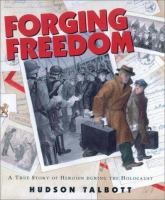 Book
Chronicles the brave exploits of Jaap Penraat, a young Dutch man, who risked his life during kWorld War II to save the lives of over 400 Jews.