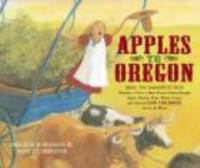 Book
A pioneer father transports his beloved fruit trees and his family to Oregon in the mid-nineteenth century. Based loosely on the life of Henderson Luelling.