What time is it, Mr. Crocodile? 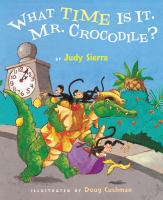 Book
Mr. Crocodile's plans to catch and eat some pesky monkeys do not work out and he becomes friends with them instead.