Z is for zamboni : a hockey alphabet 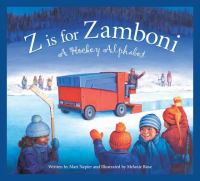 Book
Each letter of the alphabet introduces a fact about the game of hockey.