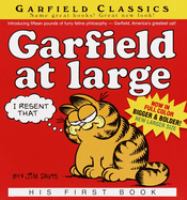 Tells how Garfield, born in the kitchen of an Italian restaurant, became Jon Arbuckle's cat.