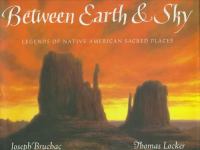 Through the guidance of his uncle and the retelling of various Native American legends, a young boy learns that everything living and inanimate has its place, should be considered sacred, and given respect.