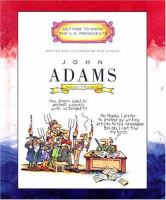 Book
An introduction to the life of John Adams, an influential patriot during the American Revolution who became the nation's first vice president and second president.