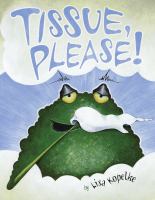 At school, dance rehearsal, and home Frog and his friends sniff when their noses run, until Frog's parents show him how much better it is to use a tissue.