The eyes of Gray Wolf 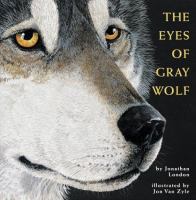 Book
On a cold northern night, a restless gray wolf encounters a strange wolf pack, from which a young white wolf steps out, and they become mates.