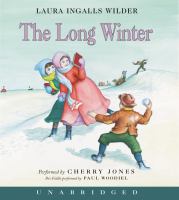 After an October blizzard, Laura's family moves from the claim shanty into town for the winter, a winter that an Indian has predicted will be seven months of bad weather.