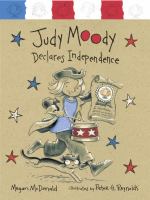 Book
After learning about the American Revolution on a family trip to Boston, Massachusetts, Judy Moody makes her own Declaration of Independence and tries to prove that she is responsible enough to have more freedoms, such as a higher allowance and her own bathroom.