Midnight forests : a story of Gifford Pinchot and our national forests 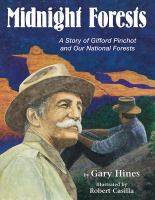 Gifford Pinchot is regarded as the father of the conservation movement. Pinchot and President Teddy Roosevelt set aside large areas and designated them public lands; these are today's National Forests.