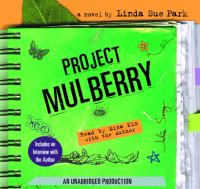 While working on a project for an after-school club, Julia, a Korean American girl, and her friend Patrick learn not just about silkworms, but also about tolerance, prejudice, friendship, patience, and more. Between the chapters are short dialogues between the author and main character about the writing of the book.