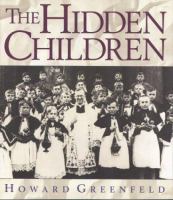 Book
Describes the experiences of those Jewish children who were forced to go into hiding during the Holocaust and survived to tell about it.