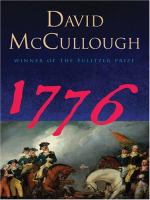 Based on extensive research in both American and British archives, 1776 is the story of Americans in the ranks, men of every shape, size, and color, farmers, schoolteachers, shoemakers, no-accounts, and mere boys turned soldiers. And it is the story of the British commander, William Howe, and his highly disciplined redcoats who looked on their rebel foes with contempt and fought with a valor too little known. But it is the American commander-in-chief who stands foremost -- Washington, who had never before led an army in battle.