The serpent came to Gloucester 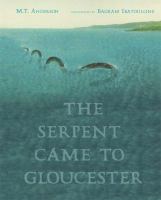 Rhyming text tells of a sea serpent that plays off the coast of Massachusetts the summer of 1817, and is hunted upon its return the next year. Includes a page of facts upon which the story is based. In a small Massachusetts fishing village in August of 1817, dozens of citizens claimed to have seen an enormous sea serpent swimming off the coast. Terrified at first, the people of Gloucester eventually became quite accustomed to their new neighbor. Adventure seekers came from miles around to study the serpent and aggressively hunt it down, but the creature eluded capture. The Gloucester sea serpent was then, and remains now, a complete mystery. Reviving the rhythms and tone of a traditional sea chanty, M.T. Anderson recounts this exhilarating sea adventure through the eyes of a little boy who secretly hopes for the serpent's survival. The author's captivating verse is paired with Bagram Ibatoulline's luminous paintings, created in the spirit of nineteenth-century New England maritime artists.