Bee gets a sweater 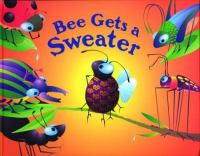 Book
A long time ago, all bees were just plain black. Then, one cold moring, Spider had an idea. With just a few balls of yarn and a pair of knitting needles, she set to work--and bees were never the same again. Can you guess what she did?