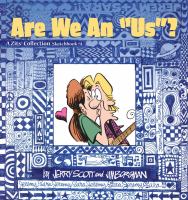 Book
This treasury marks the second for Zits, the frank & funny strip featuring the perpetually sloppy teen Jeremy & his parents Walt & Connie Duncan. Like the Zits treasury & collections before it, Big Honkin Zits masterfully guides its readers through the real-life joys & heartaches that come with being a teenager. If you thought being 15 was rough, trying being Jeremy Duncan. The teenage leading character of history's fastest-growing comic strip, Zits, has been stuck at age 15 for four years now. While Jeremy's age may not have advanced, the popularity of the strip has soared since its debut in July 1997. Today, the strip that highlights the trials and tribulations of the teenage experience boasts a circulation of more than 900 newspapers. The latest collection of the phenomenally successful strip is Are We an "Us"': Zits Sketchbook 4. The honesty and humor of Zits appeals to anyone who has ever been 15 or is currently experiencing the challenges of raising a teenager. Together with his friends and family, Jeremy humorously captures the baffling essence of adolescence perfectly. Whether he's trying to navigate the tumultuous waters of teenage relationships, enduring lame jokes by his dad, or hatching a road-trip scheme with his long-time best friend, Hector, Jeremy's plight leaves Zits readers young and old knowingly nodding their heads in recognition that they've been there themselves.