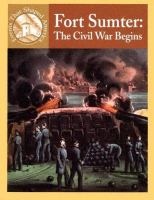 Book
Tells the story of Fort Sumter and the U.S. soldiers that defended it. Looks at the divide between Northern and Southern states that led to the event and explains how differences in culture and politics led to the long and bloody Civil War. Also covers the development of the Civil War after the attack on Fort Sumter and shows how ending slavery became the focus of the long and terrible conflict.