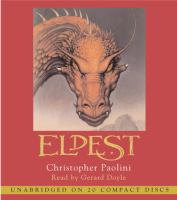 After successfully evading an Urgals ambush, Eragon is adopted into the Ingeitum clan and sent to finish his training so he can further help the Varden in their struggle against the Empire.