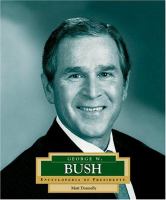 Book
Biography of our 43rd president. George W. Bush, the son of the 41st president, is the second son of a former president to gain election as president himself. He was elected governor of Texas in 1994 and re-elected in 1998. In 2000, the Republican party nominated him for president, and he defeated Democrat Al Gore in a close and contentious election. After terrorist attacks on the United States on September 11, 2001, Bush announced a "War on Terror." He gained support for an invasion of Afghanistan, where terrorist leaders were in hiding. In 2003, U.S. forces invaded Iraq, extending the "War on Terror." The invasion succeeded in overthrowing dictator Saddam Hussein, but restoring order proved difficult. In 2004, Bush defended his policies in a contentious presidential campaign and won re-election to a second term.