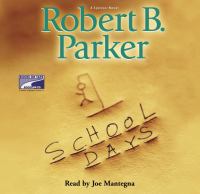 Lily Ellsworth the grand dame of Dowling, Massachusetts hires Spenser to investigate her grandson Jared Clark's alleged involvement in a school shooting. Though seven people were killed in cold blood, and despite Jared's being named as a co-conspirator by the other shooter, Mrs. Ellsworth is convinced of her grandson's innocence.