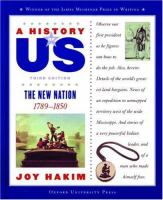 Covers American history from Washington's inauguration until the first quarter of the 19th century, including the Louisiana Purchase, Lewis and Clark's expedition, and the beginnings of abolitionism.