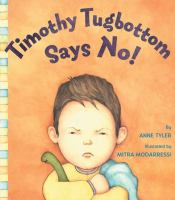 Book
Timothy Tugbottom likes his old pants, his old crib, his old bedtime story, and his old breakfast, until he realizes that new things, including sleepovers, can be good too.