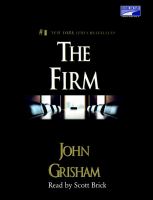 Mitch McDeere, a Harvard Law School graduate, has a beautiful, loving wife and a sharp, ethical mind. He settles down to a career in a high-rolling Memphis law firm that gives him all the material and professional perks and sets him up finding tax shelters for wealthy Texans. But for some reason, the firm's associates keep dying. Now Mitch is caught between his need to provide for his family, his increasingly sinister employers, and an FBI agent who's trying to turn him into an informer--and the bait is a shorter prison sentence for Mitch's brother Ray.