S is for silence 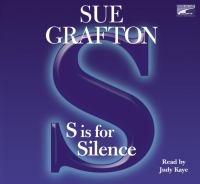 Thirty-four years ago, Violet Sullivan put on her party finery and left for the annual Fourth of July fireworks display. She was never seen again. In the small California town of Serena Station, tongues wagged. Some said she'd run off with a lover. Some said she was murdered by her husband. But for the not-quite-seven-year-old daughter Daisy that she left behind, her absence has never been explained or forgotten. Now, thirty-four years later, she wants the solace of closure.