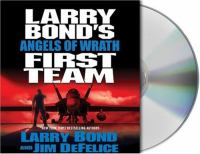 A group of four specialists from military and intelligence backgrounds who have been given free rein and unlimited funds to strike like lightning on global terror. They have a tough job ahead of them. A shipment of radioactive waste headed across the former Soviet Union has gone missing. It could easily be used to make a "dirty bomb" which could render an American city uninhabitable for centuries. With time running out the team must identify and liquidate the threat. They are unaware that their shadowy enemy has already decided on its first target: Honolulu.